Some fan with $112,000 to spend on an evening out will get this view of the final game at Oracle Arena.

Some fan with $112,000 to spend on an evening out will get this view of the final game at Oracle Arena.

The courtside seats next to Steph Curry’s iconic warmup shot are for sale for $112,823

Before each game Steph Curry takes a jumper from the entrance of the locker room at Oracle Arena as part of his warmup routine. The buyers of a pair of available tickets to NBA Finals Game 6 will watch that final practice shot sail over their heads, but the opportunity will cost more than most people earn in a year.

As The Chronicle reported last month, the well-documented ritual will end on Thursday night; the configuration of the Chase Center in San Francisco — the next home for the Warriors — will not allow Curry to try a similar shot.

The best possible seats to watch Curry prepare are not cheap. The NBA Finals Game 6 floor seats closest to the Warriors’ bench were listed for sale on Ticketmaster Tuesday morning. Seats 133-134 in row AA sit right next to the players’ floor entrance, and just a few feet from where Jordan Bell and Jonas Jerebko will be watching most of the game Thursday night.

The listed price for those seats is $48,422 plus fees, each. So your total price after adding in nearly $16,000 of fees is $112,823 for the pair. That price is actually cheaper than a set of four farther down the baseline starting at $61,000 apiece. The lone pair of sideline seats for the last Warriors game in Oakland were listed on Ticketmaster at nearly $79,000 each, as of Tuesday. If sold, any of those seats would break records for the highest price ever paid. 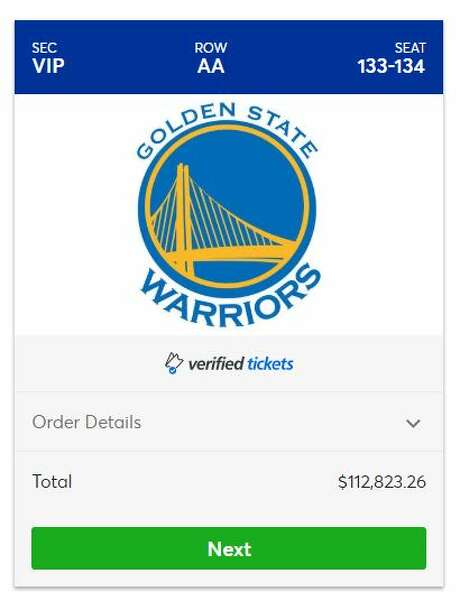 The price for two tickets to Game Six of the NBA Finals at Oracle Arena were listed for sale Tuesday for $112,843 after fees.

Fans with smaller private jet fleets will probably be looking in the upper bowl for a discount, but prices have been rising there as well. Two weeks ago the value for the most affordable ticket was hovering near $750, but that has crept closer to $875 on most resale sites as of Tuesday.

Thursday’s 6 p.m. game is the final Warriors contest at Oracle before the team moves to Chase Center in San Francisco next year. StubHub’s head of NBA ticketing said the prices should continue to creep leading up to that Oakland farewell.

“I think the narrative around these being the last games at Oracle is only going to increase,” Akshay Khanna, head of NBA, said prior to Game 1.

Stubhub had 4,143 tickets available Tuesday morning, with the cheapest seat sold so far going for $540 and the average sale price to date hitting $2,233. People from 16 countries had purchased tickets to the game.

Warriors fans are now hoping the last game at Oracle will not be the last game of the season. The team needs a victory Thursday to force a decisive Game 7 Sunday in Toronto.


READ  Does Katy Perry Nonetheless Have the Most Followers?